Posted by Unknown
The WA Brick Society is a LEGO® user group (LUG) based in Perth, Western Australia for adult fans of LEGO® (AFOL’s). 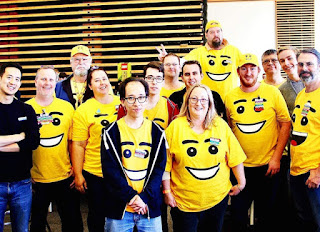 The group first formed in 2007 and became an incorporated club in 2012. The club prides itself on “My Own Creation” (MOC) style of building and holds and participates in a number of displays across Western Australia. WA Brick Society has approximately 25 active club members, with over 400 followers on Facebook. WA Brick Society meets approximately once per month, either for building or just for a relaxed social gathering.


Did you know? The club president designed and built the longest LEGO® bridge in a layout in 2013!

Are you looking to play a bigger role in the local LEGO® fan community? Do you want to meet other LEGO® fans with a passion for building? The WA Brick Society wants you!

Join the club and wow us with your building skills! Just send an email to perthpals@hotmail.com so we can let you know where and when to come along.

Some of the benefits of joining WA Brick Society:
If you have skills, experience or hobbies in other areas besides LEGO®, you can be of further help to us! We are always looking for help in areas including engineering, display planning, storage organisation, photography and publicity.

For membership forms and fees, refer to the documents in Downloads section.

LEGO® displays for your event

The WA Brick Society display models and layouts at a number of events throughout the year with the biggest display being the Model Railway show at Claremont Showgrounds over the WA Day long-weekend. Should you be interested in having WABS hold a display you are welcome to inquire by emailing the club secretary: perthpals@hotmail.com. A WABS display will always depend upon the availability of club members and costs are involved. Cost will depend upon the length of time of the display; location of the display; the cost of transporting the display to the venue and whether LEGO® may need to be purchased.

For information about LEGO® clubs and building workshops for children, see the Clubs for Kids section of our blog.